kgraves
New York
I am an economist and geographer by training, now retired. I split my time between Queens County, NY - the most diverse county in the U.S. - and Berkshire County, MA - which is much less diverse.

Food Options North of the Hoosic River: Then and Now

The exhibit (further information is available HERE) provides a glimpse into the changing landscape of food provision, both in North Adams and in the nation as a whole.  Many years ago we walked to different stores for meat, baked goods, and vegetables, typically buying one or two days' food at a time.  Over the years this type of shopping excursion evolved to the supermarket of today, where all the shopping can be done within a single location, and food may be purchased for a week or more at a time.

A hand-drawn map, shown below, identifies 61 unique locations where food was once or is currently available.  Companion videos and printed materials are available on-line at the above link to the River Street Art Project. 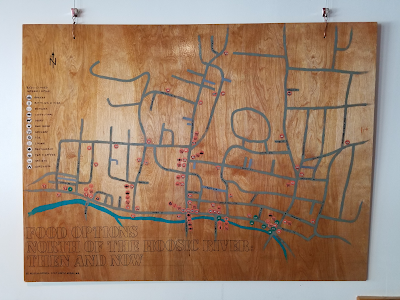 Posted by kgraves at 2:03 PM No comments:

The People's Putt-Putt -- Imagine The Possibilities

I am working on the designs for a free portable miniature golf course to be located in North Adams, MA.  In no particular order, here is a list of the ideas/themes for the holes that I've come up with thus far.  (All locations are North Adams unless otherwise specified.)  Your comments and additional suggestions are welcomed!!!

Posted by kgraves at 2:38 PM No comments:

The People's Putt-Putt -- An Introduction

About a year ago, I came up with the idea of designing a free, portable miniature golf course.  The course could be played indoors during the winter and moved out-of-doors during the summer.  It would be free for anyone to play it.  It would be based at the art studio and gallery located at 100 River Street, North Adams MA.

The designs for each of the holes are based on landmarks and/or history related to North Adams.  I used the notion of a February Fun-A-Day to kick-start the design process.  (The idea behind Fun-A-Day is to do some work on a creative project every day during the short month of February.)  I kept a notebook with me all month during February 2017, and worked pretty diligently on The People's Putt-Putt.  I'll include more details about the various holes in other posts, but below is an overview of what I have accomplished during the month.


Following the end of February, I've continued to work on the project.  I've made schematic drawings of five holes so far (as of early June 2017), and posted them on a Facebook page called "The People's Putt-Putt" -- check it out!  I plan to continue posting both here on the blog and on that Facebook page.
Posted by kgraves at 2:17 PM No comments:

The MTA is in the process of renovating the Court Square 7 train station in Long Island City.  During the renovation,  from now until sometime in April, the 7 trains are rolling through the station without stopping.

Not a lot has been changed so far at the station -- a few walls and signs have been removed.

But, now that the signs are gone, you can see some old-school graffiti.  Apparently the corrugated wind breaks of the station had been covered in graffiti, which was in turn covered over with the signs and then painted.  So, there are about 8 to 10 spots, each perhaps 4 feet high by 5 feet wide, where the graffiti is now showing through.

UPDATE as of February 11:  Previously, I did not have any photos of the graffiti, but I managed to get two rather blurry ones while my train passed through the station.  I would also be interested in seeing any that others may have taken.  See my photos below.  (The green dot is a reflection from the window of the train.)

The graffiti must pre-date the last renovation of the station, but I haven't been able to find anything that tells me when that was.

So, I'm afraid that I don't have a lot of information, but the graffiti is pretty cool.  Check it out and let me know what you think! 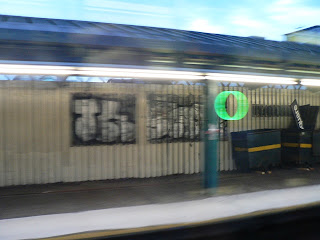 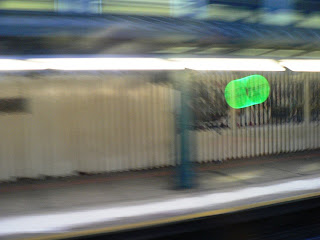 East Elmhurst and the NY Times

I've already made a couple of posts on East Elmhurst, an interesting neighborhood just north of where I live in Jackson Heights.  Apparently I'm not the only one who likes this neighborhood.

A recent article in the NY Times (published January 7, 2011) talks about how the residents of the East Elmhurst census tract have stayed in their homes the longest of any of the NYC census tracts.  The median move-in date for East Elmhurst residents is 1974.  (The average for all of NYC is 1995.)

The article, written by Joseph Berger, goes on to interview several East Elmhurst residents.  Several of the points that he makes in the article echo my own observations.

Anyone interested in this area should definitely check out the article.
Posted by kgraves at 8:24 PM 1 comment:

Josip Brletic recently commented on my East Elmhurst 11369 post asking about the stone columns that are on either side of 90th Street, just north of 30th Avenue toward Astoria Boulevard. He asked if there is any historical significance to these columns. I had not noticed these columns before, but took a ride over there on my bike to check them out. I don’t yet know the entire story, but this block has really piqued my interest. Josip, thanks for your question!!

The top picture, of the east column, was taken by my wife on our recent visit.  The bottom picture is from  Google street view, and shows the west column. 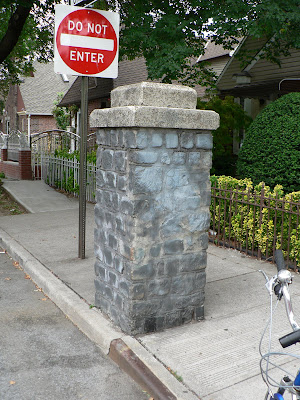 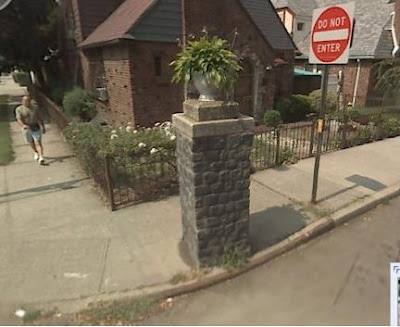 In the Google photo, the column has a planter on top, but (as you can see from the top photo) when I visited (July 2010) there were no planters and the columns are pretty plain. The columns have also seem to have been painted over, probably to cover graffiti. There are no such markers at the north (Astoria Boulevard) end of the block, but that end has been redeveloped, so if markers were originally there they could have easily been removed by now.

These columns (and the block) had been noted before (scroll down towards the bottom, past his discussion of the Fair Theatre) by Kevin Walsh of Forgotten New York, always a great source of information about any area in the city. 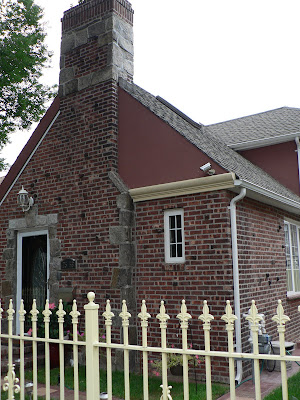 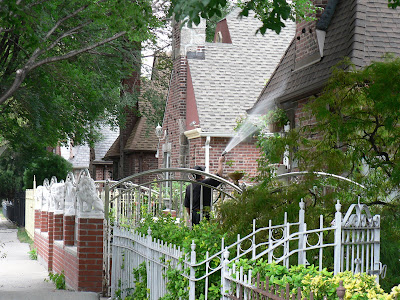 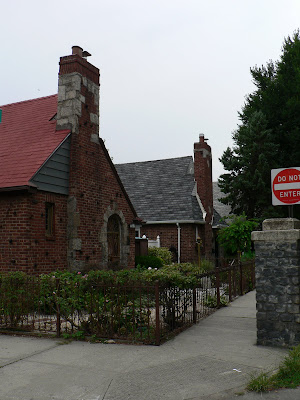 Below is a screen shot from the NYC OASIS website and you can easily see that the lot size of these stand-alone single-family houses differs from those in the surrounding blocks, which are all row houses. OASIS also tells us that all of the houses on this block were built in 1934. 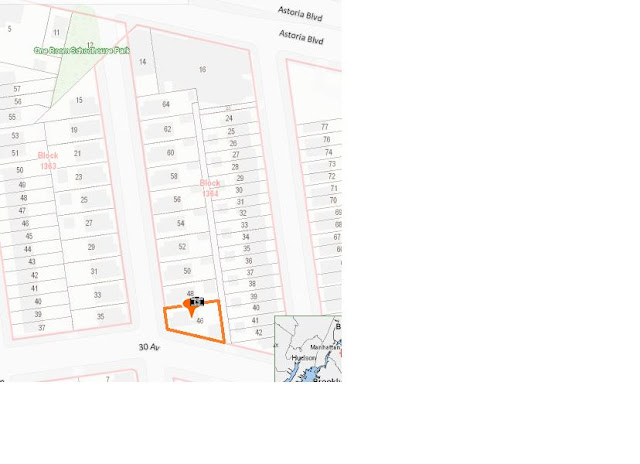 Astoria Boulevard was improved and widened to handle truck traffic from the Triborough Bridge.  Robert Moses took over construction of the Triborough in 1934. Further research would be needed to identify any definitive connection (if there is any) between this block on 90th Street and the nearby work on Astoria Boulevard.

Another interesting thing about this block is that it was recognized by the Queens Historical Society’s Queensmark program. This program was designed to honor and recognize structures and sites that have an outstanding cultural, historical, or architectural significance. The program started in 1996, and has continued on and off since then, honoring sites around the borough. In 1999, the un-remodeled houses on this block were honored and plaques noting the honor were mounted on the front of the homes. I was unable to find any information about the specifics of the award using internet searches, but an email to the Queens Historical Society yielded the following information:

"We were told by one of the residents that these structures were built as summer homes in the 1920s. While we cannot verify this information, members of the Queensmark Committee thought they were attractive. They were Queensmarked as part of our Corona and East Elmhurst celebration that was held at the Queens Hall of Science about ten years ago. The residents were very supportive. The homes were Queensmarked because of their appearance (i.e., architectural significance) rather than their history which unfortunately we know little about.

"We use a similar process as the Landmark Preservation Commission (LPC) in choosing Queensmark (a program that is run by the Queens Historical Society) by choosing sites of historical, cultural, or architectural significance. While a Queensmark acknowledges the merit of a structure, it unfortunately does not protect it from demolition. The Queensmark program was created to help raise awareness of important structures and to hopefully catch the attention of the LPC and eventually have it considered for NYC Landmark status.

A 1999 article in the New York Times about the Queensmark winners of that year gave the following brief mention to the block and its homes:

Note the Queensmark references to the 1920s, versus the data from the city that indicates 1934. Again, further research might be needed to get a more accurate date for the construction of the homes.  Below is a photo of one of the Queensmark plaques, which are mounted on the facades of many of the homes on this block. 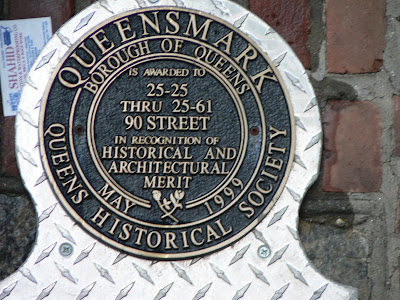 Finally, another interesting tidbit about this block is that the northern end (at Astoria Boulevard) was the location of the last one room schoolhouse in Queens, and is the current location of One Room Schoolhouse Park, and is also mentioned in Forgotten New York. Interestingly, and perhaps not coincidentally, the schoolhouse was torn down in 1934, the same year that the houses were built and that Moses took over the Triborough -- a busy time in the neighborhood!

The schoolhouse opened in 1879 and served the Frogtown community, which was located by the swamp on the other side of Astoria Boulevard. The swamp was no doubt the remains of the Jackson Mill Pond. The map below shows an overlay of the “old” grid from 1909 and a current street layout. You can see the boundaries of Jackson Mill Pond and how it relates to the current street grid. The New York Public Library has a nifty site that has overlaid old and new maps, where you can play with relative transparency of each. The link to this particular map is here. 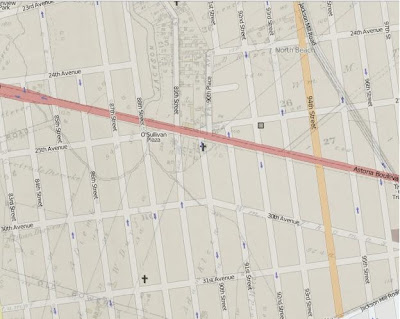 Posted by kgraves at 9:22 PM No comments:

Thoughts on Jane Jacobs and Some NYC Neighborhoods of Today